Wildwind Sailing respects your privacy. We use cookies, which do not collect any personal data about you, for the purposes of analysis, marketing and social media integration. Please read our privacy policyOk 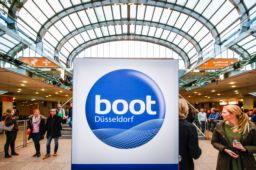 Lilian and Peter from Wildwind can be found in Hall 15 G 21, at the booth of the Hobie Cat Klassenvereinigung 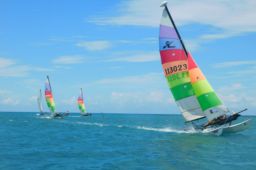 As you bid farewell to summer-only members at the sailing club or sadly pack away the dinghy for the year: are you dreaming of a turquoise ocean and surfing down tropical waves with the spinnaker in full flight?

If you are looking for a sun drenched break from the Northern European winter weather AND you wouldn’t mind some time off from your youngsters too then our Mauritian centre may be just what you need.

Experience Wildwind Mauritius for only kr11725 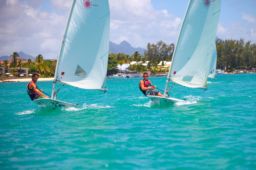 Meet Wildwind at BOOT 2019 in Düsseldorf

Lilian and Peter from Wildwind can be found in hall 15 G 21, near Prosail

What is it that sets Mauritius apart from other tropical Islands?

What is it that makes a holiday in Mauritius so special?  A combination of the history, the culture, the people and the food make for a magical holiday experience.

Swim with dolphins in the wild - you're really this close!

It’s hot now – but what about winter? 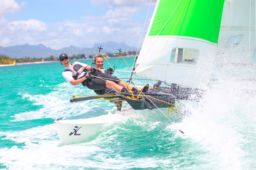 It’s one of the biggest sailing regattas of the season: the Hobie 2017 Multiworlds & Europeans. Sponsored by Wildwind, almost 300 boats have registered for the event and Wildwind’s own Simon, Thanos and Hans will compete for the grand prize.

Have you tried foiling yet? Top tips from Marko

In 2016 we invested in foiling kits for some of our Laser fleet, converting the standard everyday Laser in to a flying machine.

This year the Hobie 2017 Multi Worlds & Europeans will be held in Noordwijk, Holland (a.k.a. ‘the beach of Amsterdam’) on the 20-29 July and we are proud to announce that we are once again sponsoring the event. We will be supporting ZV Noordwijk, in partnership with VR Sport Media, in the production of daily social media and video reports, and we will also be offering 2x one week holidays to our Vassiliki centre and 2x one-week holidays to our Mauritius centre as prizes (all excluding flights).

Experience a wonderful climate for watersports in Mauritius!

In the midst of the cold, dark winter days we thought we’d give you some inspiration for that much sought after tropical holiday with some weather facts from our Mauritius centre.

Best wishes from all of us at the Wildwind team, wherever you might be…

You may not know but for the last 6 months we’ve had a new member of the Wildwind Team helping out Simon to keep you updated with all our news – that person is Claire Thoroughgood. We met Claire while she worked as an Art Editor for Yachts & Yachting magazine, she was sent out to Vass to write an article on us and she’s been hooked ever since! She now visits us every year to brush up on her sailing skills or treat herself to a week of Healthy Options while her husband, Rich, blasts around the bay on his catamaran or windsurfer.

It's often said that it’s the Wildwind staff that make our holidays so enjoyable… and we have been lucky enough to have employed some truly wonderful individuals. One of our favourites is Stew Edge who has proven himself in some of the world’s toughest environments by sailing across the Atlantic, climbing Mount Everest and fulfilling a life long dream of crossing Antarctica. We recently asked him about his time at Wildwind…

WOW – WHAT AN EVENT!

174 catamarans have been gracing the Austrian Lake Neusiedl this week with one of Europe’s most important regattas of the year – The Hobie Cat MultiEuropean Championships.

May 8-15 and May 15-22  Catamaran and Laser Intensive Training Weeks - These 2 weeks are usually sold out quickly as they are a great way to kick start your sailing season.  Open to anyone with at least a season's racing experience our resident experts will show you how to get the most out of your boats, and how to sail them on all points of sail in the fastest possible way.

This article was originally published in Yachts & Yachting (December 2014)

Claire and Rich Thoroughgood escape to Wildwind’s new all-year-round beach resort on the idyllic island of Mauritius, the perfect antidote to a British winter.

Are you ready to book your sailing holiday, or do you have any more questions? There are number of ways in which you can contact us.